Colourful and vibrant sums up the new Alton Towers CBeebies Land Hotel, which incorporates LeesonBound on the walkway to the entrance. The strong, hard wearing product provides the base to a colourful musical theme of notes on a stave.  The installation is surrounded by a brightly lit rainbow arch and an aeroplane structure forms the centrepiece of the impressive approach.

The colourful theme is continued throughout the hotel, that is aimed at young families, with 34 out of the 76 rooms specially themed around the CBeebies channel’s most popular programs. Construction of the project has been ongoing since September 2016 and was officially opened on 8th July 2017 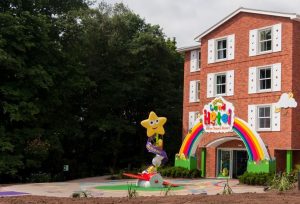